"The EU - together we are strong and relevant"

The 65th Frankfurt Book Fair has closed its doors again. The German government’s information stand welcomed 35,000 visitors. Many interesting guests were interviewed at the stand, including MEP Michael Gahler, who fielded questions put by both the interviewer and the audience at the fair. 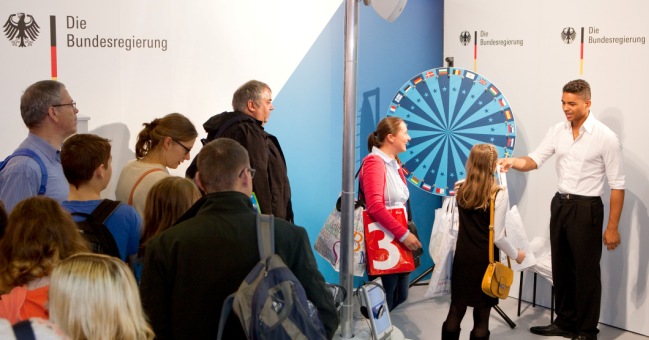 A quiz allowed visitors to check how much they know about Europe Photo: Gösta Rühl

The German government presented a wide and varied programme embracing both information and entertainment. Visitors to the Book Fair had the opportunity to find out more and to put their own questions.

"The EU should speak with one voice"

"The European Union can only be strong and relevant if we stick together," declared Michael Gahler, member of the European Parliament’s Foreign Affairs Committee. The MEP pointed to events off Lampedusa, in the immediate vicinity of the European Union. "If we pull together we will be successful," he added.

He also spoke about the EU’s election observation mission in Pakistan. This is an important contribution to fostering democracy, he said. To ensure that the observation mission is objective, it is headed by a Member of the European Parliament, whose mandate makes him or her independent of any directives.

Europe – a workshop where we can learn from each other

The European Union has agreed to provide a sum of six billion euros for an initiative to combat youth unemployment. "Young people must be given a chance," demanded Thomas Mann, Vice-Chair of the European Parliament’s Employment and Social Affairs Committee, speaking at the German government’s stand. The "youth guarantee" is intended to ensure that every young European is enabled to find a job within four months as far as humanly possible.

The MEP Thomas Mann pointed out that "there is no uniform European education policy". But member states can learn a lot from one another, he said. "Spain has been working for two years to implement a training system based on the German dual system," in which time is split between hands-on experience in industry and theoretical instruction, said Thomas Mann. He described Europe as a workshop where we can learn from each other. Not only does the EU foster student exchanges under its Erasmus programme, he explained. It also encourages young people to undertake practical placements in companies and vocational schools in other EU member states with its  Leonardo da Vinci programme. The MEP called on master craftspersons and companies to enable trainees to take part in these exchanges and to give them the support they need.

"We aim to get people to think," declared Carina Feuerriegel, Project Manager of "My Europe" during a talk at the stand of the German government. "We should look to Europe, not only to Germany!"

"My Europe" is an independent initiative that is, for instance, holding two-day workshops for young people in 30 European countries. This gives the young people a chance, "to break the daily routine of school and meet other personalities," she explained.

On the first day, the young people meet business leaders, academics and politicians, she continued. On the second day, the "media day" they go to a newspaper and learn how to write an article – on Europe 2030.

"Not only is it fun to read books. Reading helps us all develop our personalities and identity," stated  Hermann Kues, Parliamentary State Secretary at the Federal Ministry for Family Affairs at the award ceremony in Frankfurt. The jury of literature specialists and critics evaluated 586 books published within the last year before awarding the 2013 German Children’s Literature Award.

A day in the life of a government spokesman

The Chancellor is a "communication wizard" said Georg Streiter. If a question has to be sorted out quickly he can always text the Chancellor, and be certain of receiving an answer within half an hour at the absolute outside.

The German government’s stand focused its information services on Europe, partly in view of the elections to the European Parliament scheduled for 25 May 2014.

Georg Streiter called on voters to go to the polls and ensure a high turnout. The European Parliament is, after all, the only elected institution within the EU. We should realise that 70 percent of our national legislation has its roots in the European Union, he said and urged young people to become more interested in Europe. It is not only important to learn several languages. Young people should take part in exchanges or undertake internships at the EU to widen their experience.

First-hand information on other issues, from Germany’s shift to putting its energy supply on a more sustainable footing, to demographic trends and education were also available at the stand of the German government. And visitors had the opportunity to look behind the scenes in Berlin’s corridors of power. What is a typical working week in the life of the Chancellor, for instance. The "Chancellor’s week", available online at the government's website, provides the answers. 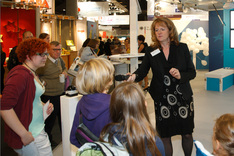 Information and a quiz