An active and committed member of the international community

To mark the 40th anniversary of Germany joining the United Nations, Chancellor Angela Merkel has underscored the "unique importance" of the UN. She pledged that Germany will remain a reliable partner. 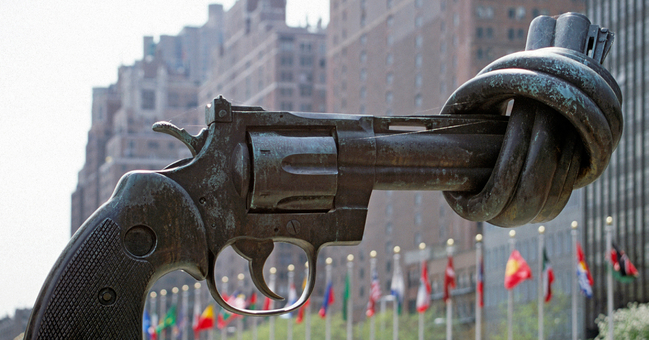 To mark the anniversary the Chancellor addressed a letter to the United Nations Association of Germany. "The United Nations and its specialised agencies are uniquely important in international cooperation. All the peoples of the world are represented in these bodies," declared Angela Merkel. This gives it a high degree of legitimacy to answer existential questions relating to war and peace and to identify solutions to the problems that will shape our common future.

Hopes of a peaceful future worth living in

"Peace, liberty and development are reflected in the founding Charter of the United Nations and the Universal Declaration of Human Rights," the Chancellor continued. "Our hopes of a peaceful future worth living in are based on shared values." In particular the Millennium Development Goals and the way these are aligned to the vision of sustainability entail challenges that can only be met within the framework of the United Nations.

Speaking at a ceremony in New York, UN Secretary-General Ban Ki-moon praised Germany’s services to the international community. Throughout its membership Germany has been one of the "most active supporters" of the United Nations. Today it is the third largest contributor to the UN budget.

During the ceremony, the German Ambassador to the United Nations, Peter Wittig, handed over to the Secretary-General the newly renovated quiet room close to the Security Council Chamber. It was a gift from Germany. The room is only open to delegates and is used for meetings during Security Council sessions.

"We believe that the United Nations has and retains a key function in international politics," said the Federal Foreign Minister. That is why it is important for the UN to adapt to today’s world and be willing to embrace reform if it is not to lose authority.

Germany will be celebrating the anniversary on Wednesday with a ceremony that is to be opened by Guido Westerwelle. This will be followed by a conference organised by the United Nations Association of Germany.