The German government has again raised its support for victims of Typhoon Haiyan by another two million euros. Germany will now provide a total of 6.5 million euros for emergency humanitarian aid in the Philippines. 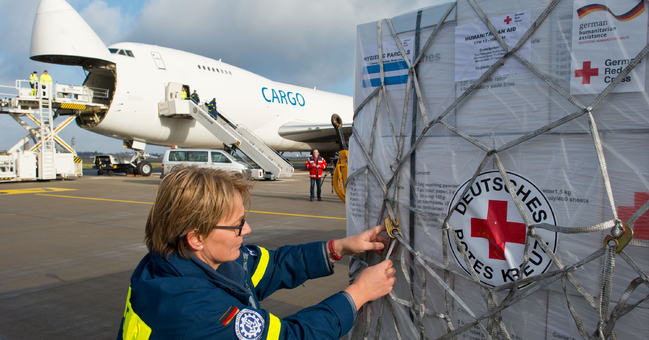 The first supplies from Germany have already arrived in the Philippines Photo: picture-alliance/dpa

Government spokesman Steffen Seibert announced last week that at this difficult time the Chancellor has stressed that the Philippines can rely on extensive and effective aid from Germany: not only emergency aid but also longer-term support to rebuild the areas worst hit by the disaster. The Chancellor, he said, would like to express her thanks to the many aid organisation volunteers who have been helping.

Emergency aid is being delivered by German and international aid organisations, which are supplying the people in areas devastated by the typhoon with urgently needed supplies. The projects include a basic store for the International Red Cross and Red Crescent Movement, which the German Red Cross is establishing in the region.

Support is also being accorded to the activities of German aid organisations to put up emergency accommodation, and restore supplies of water and food and sanitation facilities. THW and German Red Cross experts are already in the Philippines, as are member of the International Search and Rescue Team (ISAR).

Governments and aid organisations swung into action immediately after the typhoon. More and more rescue teams are now arriving in the worst hit areas.

Assistance with drinking water and infrastructure

Two aircraft left Berlin and Frankfurt last week with relief supplies for 10,000 families. They carried drinking water purification and supply plants and technical equipment to restore the infrastructure destroyed by the typhoon.

A total of 70 tonnes of supplies are being transported by air to Manila, where they will be distributed by the aid organisation World Vision and the International Search and Rescue Team (ISAR).

More than twelve million people are suffering in the wake of Typhoon Haiyan. The United Nations Children's Fund (UNICEF) estimates that up to 4.7 million children are affected.

The official death toll is still unclear. The Philippine disaster relief organisation puts the figure at almost 4,000, while aid organisations fear that the final toll might be higher. According to the Red Cross 22,000 people are still missing.

The United Nations has raised its estimates of the number of people left homeless by the disaster. The figure has doubled over the last two days to four million – on 15 November it was still thought that 1.9 people had lost their homes. By way of comparison, the total population of Berlin is 3.5 million, so the new figure means that more than the entire population of Berlin now urgently need a roof over their heads.