The heads of state and government of EU member states have agreed at a high-level conference on youth unemployment in Paris that all young people should be guaranteed a job or training. Chancellor Angela Merkel pointed to the responsibility of each individual state. 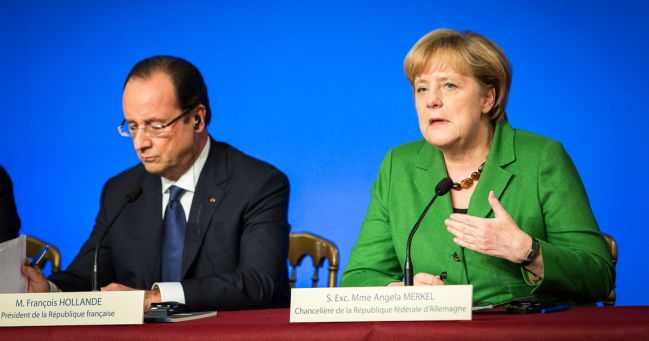 The Chancellor and the French President at the press conference Photo: Bundesregierung/Denzel

"The viability of our continent and of the European Union is inextricably linked to the prospects we can offer our young people," said Angela Merkel at the end of the conference. The lion’s share of responsibility for tackling youth unemployment lies with each nation, she declared.

The heads of state and government met in Paris to discuss further steps to tackle youth employment. The Chancellor praised the network of employment agencies which is contributing to an exchange of experience regarding the different placement systems in Europe.

It is important, she added, to involve both sides of industry in discussions. "Politicians do not create jobs. Jobs are created by industry and business when the environment is favourable," said Angela Merkel. At the conference the European Investment Bank also reported that, "it is already working hard and that the first loans have been awarded".

Realising the Youth Guarantee by 2015

French President François Hollande said that over the next two years the Youth Guarantee is to be realised. Three priorities were set during the deliberations for fighting youth unemployment: training, integration into the working world and business start-ups for young people. The EU will be putting up a total of 45 billion euros.

Objectives of the Youth Guarantee

- All young people under the age of 25, whether or not they are registered with their national employment agency, are to receive a specific offer within four months of leaving formal education or becoming unemployed.

- They are to be offered a job, continued education, an apprenticeship or a traineeship in line with their personal situation and needs.

- The EU will support affected countries through the European Social Fund, with another six billion euros coming from the Youth Employment Initiative.

José Manuel Barroso, President of the European Commission, called on EU member states to finalise their plans for tackling youth unemployment by December. The EU will do everything it can to ensure, "that there is no lost generation," he said.

Outcome of the Berlin Conference in July

The Berlin Conference on 3 July 2013 laid down specific measures for the different levels – labour ministers, labour agencies, the two sides of industry, the European Investment Bank and the European Commission.

At this first exchange of experience in Berlin, Germany explained its successful dual training model in which young people receive classroom instruction parallel to hands-on training in industry. The first bilateral agreement to promote youth employment have now been signed by Germany and Spain, Italy and Portugal.