Works of art found in Munich

The discovery of graphics, drawings and paintings in Munich raises questions as to their provenance. The government is urging that the matter be clarified without delay. The first works of art, where there are reasonable grounds to suspect that the works might have been confiscated by the National Socialists, have now been listed online at www.lostart.de. 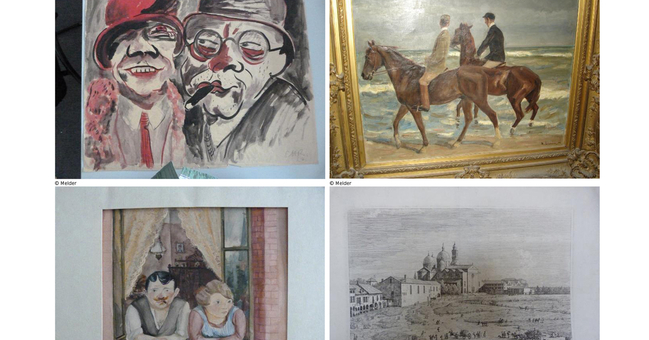 In order to clarify as swiftly and transparently as possible where the works of art came from, research into their provenance has been stepped up on a broad basis. This decision was taken by representatives of the ministries involved at federal and state level.

They have agreed to assign a qualified task force comprising at least six experts to research the provenance of the pieces. All pertinent institutions at national level and within Bavaria are to be involved.

The work of the task force will be coordinated by the Berlin-based Bureau for Provenance Investigation and Research (AfP). It is to be headed by Ingeborg Berggren-Merkel, the former Vice-Chair of the AfP Advisory Committee and former Head of Office of the Federal Government Commissioner for Culture and the Media.

The Bureau for Provenance Investigation and Research (AfP) supports all state museums in the Federal Republic of Germany in identifying cultural artefacts in their collections or in their possession which were taken from their lawful owners during the period of National Socialist rule. It is attached to the Institute for Museum Research of the State Museums in Berlin – Prussian Cultural Heritage Foundation. The financial resources for the day to day running of the Bureau for Provenance Investigation and Research have been provided by the Kulturstiftung der Länder.

As well as expert advice, the Bureau offers practical support: the German government promotes decentralised province research projects for which a total of two million euros per annum are currently earmarked. These funds are allocated by the Bureau in response to applications submitted.

Some 970 works of art must now be investigated. Of these 380 can be classed as what was termed "degenerate art". In the case of about 590 works, investigators must determine whether they were taken from their lawful owners as a result of National Socialist persecution. This does not apply to any of the other objects confiscated.

The first 25 works of art discovered in Munich were listed on the internet Lostart Database on 11 November (www.lostart.de). There are grounds to suspect that they might have been confiscated by the National Socialists.

This list is to be updated on an ongoing basis. It is kept by the Magdeburg-based Coordination Office, which is run by the federal and state governments as the central German service facility for documenting cultural artefacts and recording lost art. It is the contact for enquiries relating to documented objects, while enquiries regarding criminal procedures are dealt with by the Augsburg Public Prosecutor’s Office.

Between 1933 and 1945 numerous owners of art works and cultural artefacts lost all or part of their collections as they were persecuted by the National Socialists: works of art were sold under duress or under desperate circumstances, left behind when their lawful owners fled, seized or looted.

Finding these cultural artefacts and returning them to their lawful owners has long been a special concern of the German government. In public institutions the Federal Government Commissioner for Culture and the Media urges the swift and complete verification of all works in their possession.

In December 1999 the federal government, state governments and central local authority associations signed a joint declaration, which makes the identification and return of cultural artefacts taken from their lawful owners, particularly Jewish owners, as a result of persecution by the National Socialist regime a duty of public institutions within Germany.

One year earlier, at the Washington Conference, basic principles for the return of assets seized at the time of the Holocaust were agreed. Germany and 43 other states signed the declaration and undertook to search for more Nazi-confiscated cultural artefacts and where necessary take appropriate steps to achieve a just and fair solution.