Germany must not artificially reduce its strong level of exports. Europe as a whole must become more competitive, declared Chancellor Angela Merkel in Berlin at the Führungstreffen Wirtschaft (business leaders forum) organised by the Süddeutsche Zeitung. She declared that reducing overall debt levels must be a key project over the next four years. 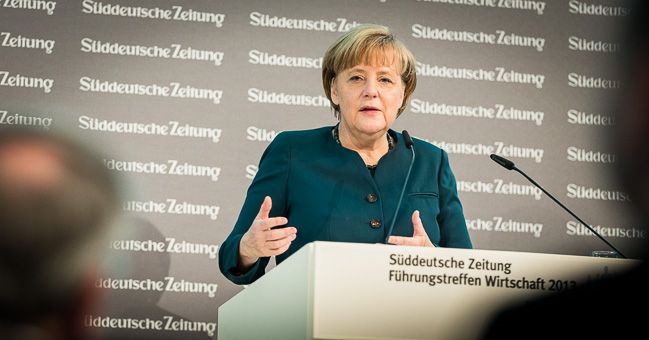 "Germany can only prosper in the long term if Europe prospers," says the Chancellor Photo: Bundesregierung/Denzel

"It would be absurd if we were to start getting German companies to cut their production or compromise the quality of their products." That cannot be the aim of a successful Europe, said Angela Merkel, commenting on the debate over Germany’s exports.

The German trade surplus comes primarily from exports to emerging economies. In terms of the demand side, the aim must be to strengthen domestic demand, she stressed. Stronger growth in Europe is in Germany’s interests.

Germany’s debt is currently equivalent to about 80 per cent of the country’s gross domestic product (GDP). A level of 60 per cent is the maximum permissible. "Over the next four years, reducing overall debt will thus be a key task for the German government," underscored Angela Merkel. This presupposes that no new debt is incurred.

One problem in Europe is that we have promised practically everything and delivered very little, added the Chancellor. "That will have to change." European actions must become more reliable. Solidarity is part of this, because solidarity and national responsibility are two sides of the same coin. Cooperation must also become closer.

Europe can point to achievements though: reduced budget deficits, lower unit wage costs and reduced balance of payments deficits. With a view to the countries receiving bailout assistance, the Chancellor pointed to the successes achieved in Ireland and Spain. Ireland will exit the support programme, and the Spanish programme will expire as planned. "Portugal’s path is hard, but the country is on the right track," said the Chancellor.

Greece too has achieved an incredible amount, but more work lies ahead. "Greece is now running a primary surplus, which was not thought feasible, and has thus met one of the preconditions for becoming self-reliant again."

"Investor confidence has been restored slowly," underlined the Chancellor. This is partly because the European Union and the euro zone have undertaken a number of institutional measures. Angela Merkel pointed to the fiscal compact and the establishment of a banking union.

As for the banking union, certain steps cannot happen without treaty change, she reported. "Germany is willing to modify the treaties," declared Angela Merkel. To retain the confidence of investors, transparent supervision of all too-big-to-fail banks in all euro-zone member states is necessary. It is up to politicians to give the European Central Bank the chance to put in place an independent supervisory entity.

"We should not stand still, we should ensure today that our house, the euro, is fit to face the storms of the future," declared the Chancellor.

This was the seventh “Führungstreffen Wirtschaft” organised by the Süddeutsche Zeitung. This year’s motto is "Strategy for more growth".