Germany has committed a total of 100 million euros to the Palestinian Territories for 2013. It was important, Chancellor Merkel said after meeting with Palestinian President Mahmoud Abbas, that economic development was successful and tangible for the population. 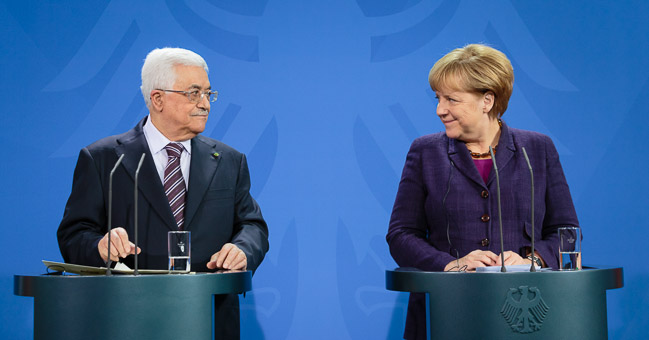 Following her meeting with President Abbas in Berlin Angela Merkel emphasised that it was very important for the Federal Government that the possible US-led Israeli-Palestinian talks were a success. She said the two leaders had discussed the prospects for that.

The Chancellor said: “Germany has always indicated that unilateral steps are not the way to push forward the peace process.” Negotiations were the only way to bring about a solution, she added. Asked about settlement building, she urged Israel to show restraint with its settlement policy. President Abbas stressed that the Palestinian side was serious in its efforts to conduct the negotiations.

A lasting resolution of the Israeli-Palestinian conflict can, in Germany’s view, only be achieved through negotiations that lead to a two-state solution: The State of Israel and an independent, democratic and viable Palestinian state.

With regard to Syria, Angela Merkel said: “Now we need to work towards Geneva II taking place as soon as possible.” Only a political solution could bring about a peaceful resolution to the conflict in Syria, she went on.

At their meeting in Lough Erne, Northern Ireland on 18 June 2013 the heads of state and government of the G8 had discussed the situation in Syria and ways to end the violence. The Declaration issued at the end of the summit meeting underlines the common commitment to finding a political solution. It also calls on a second international Syria conference (Geneva II) to be held as soon as possible.

EU involvement
The EU is the biggest donor to the Palestinian Territories. The EU's contribution, of which Germany provides about 20 per cent, totals approx. 480 million euros. Bilateral aid from individual Member States adds about the same volume again. So far in 2013 the EU has donated around 248 million euros in support for the Palestinian Territories.