Shared goals for a better world

Global challenges have become increasingly pressing in recent years. It is not only developing and emerging economies that are affected. It is the entire world. The Cabinet has now adopted a report on the objectives for sustainable development and climate policy as of 2015. 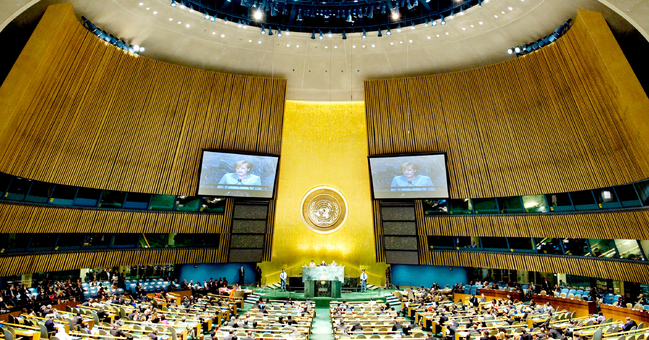 The Chancellor at the UN Summit on the Millennium Development Goals in 2010 Photo: Bundesregierung/Denzel

The report, entitled "The post-2015 agenda for sustainable development: shared global challenges, interests and goals" meets the commitment of the German government to report regularly on negotiations at international level.

The report praises progress made towards achieving the Millennium Development Goals. It also reaffirms the intention of the German government to continue helping to achieve the goals in the time that remains before 2015.

In 2000, the heads of state and government of UN member states adopted the Millennium Development Goals. The eight quantifiable goals are to be achieved by 2015. They provide the framework for international development policy. As of 2015, they are to be replaced by new goals. To this end work is currently in progress on the post-2015 development agenda.

The German government is working to achieve a set of goals intended to eradicate poverty within one generation through sustainable development. The prosperity and wellbeing of all people are to be guaranteed within the ecological limits of our planet.

In terms of contents, the set of goals is to take its lead from the Millennium Declaration and "The Future We Want", the outcome document of the Rio+20 United Nations Conference on Sustainable Development. Thus, the Millennium Development Goals that have not been achieved by that date will have to be pursued. Sustainability is a vitally important aspect, along with universal human rights and good governance.

The underlying philosophy is that there is a very close link between eradicating poverty and promoting sustainable development. They are interrelated and mutually reinforcing.

The future agenda must be well prepared

Since 2010 the German government has been involved in the work on the post-2015 development agenda. The initial proposals for a new standard objectives set of goals are to be finalised before the next summit on the Millennium Development Goals, which is to be held this September.

The new set of goals are to be universally applicable to all countries. They are to build on the responsibility of each nation for taking charge of its own destiny, and take into account the different national circumstances, abilities and development status. National policy approaches and priorities too are to be respected.

The future agenda is to apply not only to developing and emerging economies, but also to the industrialised countries, and thus to the world as a whole. The inputs of the entire government will thus be required to produce them, on an inter-ministerial basis.

Former Federal President Horst Köhler is actively involved in the preparatory work. He is a member of the United Nations High-Level Panel of Eminent Persons on the Post-2015 Development Agenda. The 27 members of the panel have been selected from the ranks of politics, the academic and research community, civil society and industry.

The German government has praised the preparatory work already undertaken, and made special mention of the excellent work of the UN High-Level Panel.