The day with two faces

9 November 1938 is synonymous with the darkest chapter in Germany’s history. The same day, 9 November, in 1989 was the happiest day in our recent history. The German government supports and promotes the commemoration of both – the anti-Jewish pogroms of the "Night of Broken Glass" and the fall of the Berlin Wall. 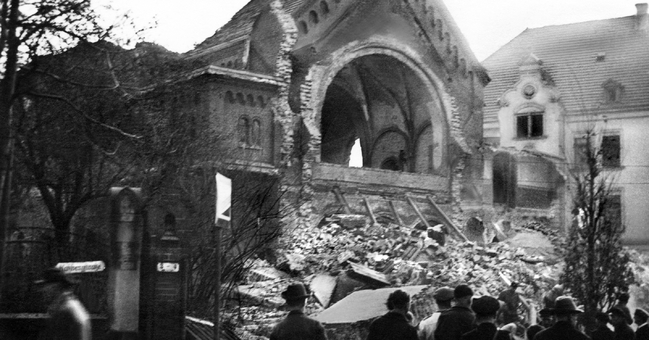 9 November 1938 - one of the blackest days in German history Photo: Bundesregierung

Speaking at an event to mark the 75th anniversary of the anti-Jewish pogrom, Chancellor Angela Merkel declared that this was one of the blackest days in German history. Unfortunately the developments in German history subsequently became even more dramatic with the Holocaust and the break with civilisation, she said in her video podcast. The 9 November 1938 reminds us, "that we must always be aware of our past so that we can shape the future responsibly".

Yet in 1989, the 9 November was a day of great joy and hope, declared the Chancellor. The fall of the Berlin Wall is proof that democracy and the rule of law can be achieved peacefully. "That gives us hope for the future," said Angela Merkel.

The Chancellor expressly thanked those who were themselves victims, eye-witnesses of the persecution of Jews. "That these people who have experienced such terrible things, who were in concentration camps, who were persecuted, are prepared to talk to us Germans again is not something that can be taken for granted by any means." We must make provisions for times to come when we no longer have any eye-witnesses of these atrocities. That is why we have a "comprehensive culture of commemoration ". This includes not only places, like the Memorial to the Murdered Jews of Europe, but also the "Stolpersteine" initiative, which she finds excellent. (The "Stolpersteine", literally stumbling blocks, are small brass plaques inserted in the pavement outside the last homes of victims of the National Socialist regime. The plaque bears the name, age and fate of the victim. They are a constant reminder to all pedestrians of the individual fates that lie behind the statistics.)

To keep memories alive, federal and state governments also have many programmes that target extremism and anti-Semitism, said Angela Merkel. "We also need everybody in the country to have the courage to stand up and declare that we will not tolerate anti-Semitism." The Chancellor sees it as "a very positive experience that today we once again have a thriving, vibrant Jewish community in Germany ". The German government supports this community.

Many people will still remember the words uttered on 9 November by Günter Schabowski, member of the Politburo of the German Democratic Republic, when asked when the new liberalised travel regulations he had just announced would come into force - "Immediately! Without delay!" His response unleashed a tidal wave as thousands of people in East Berlin descended on the border crossing points.

Photo collection: The Day the Berlin Wall fell in November 1989 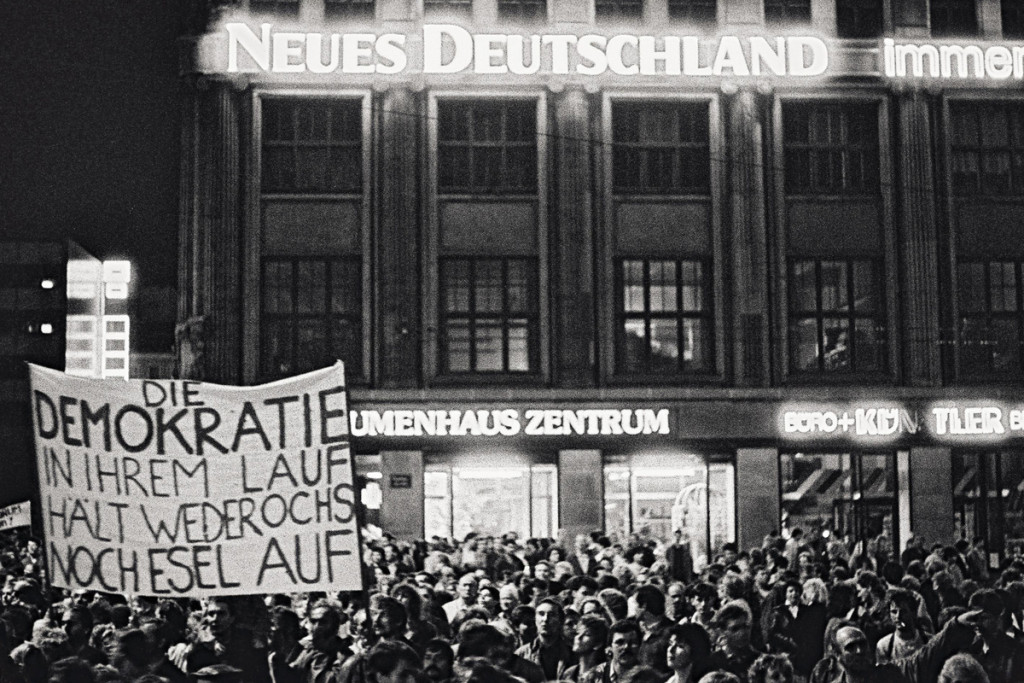 Since September 1989 regular Monday demonstrations for freedom of opinion and the freedom to travel had been held in Leipzig and other towns and cities in the German Democratic Republic. 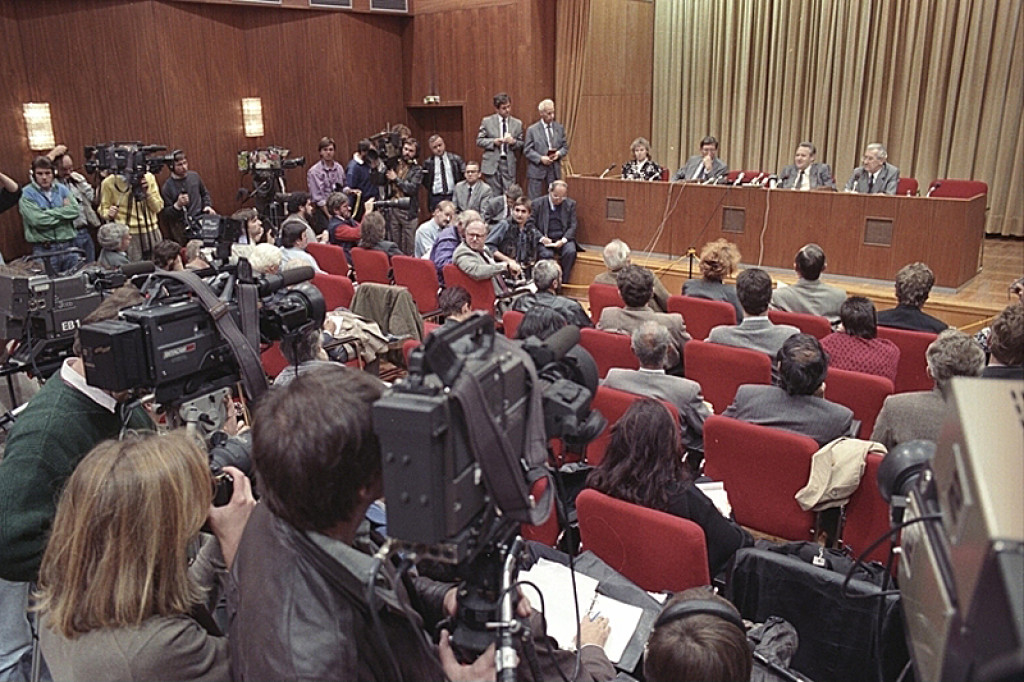 On 9 November 1989 Günter Schabowski announced to the press that the Politburo had agreed on a new liberalised travel regime. When asked when the new regulations were to come into effect, he answered, "Immediately! Without delay!" 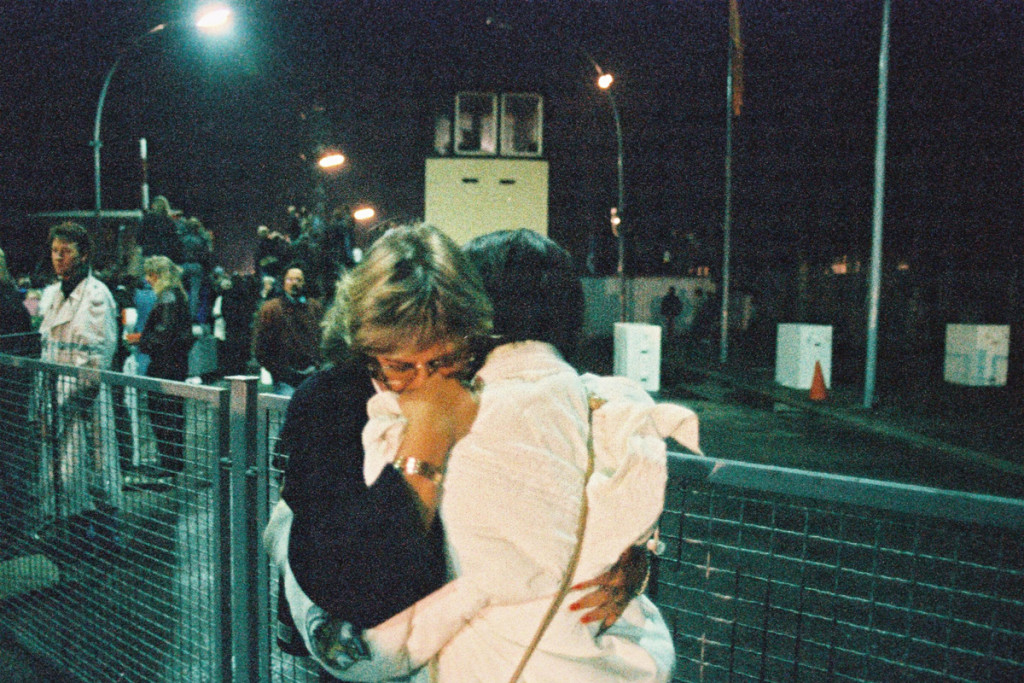 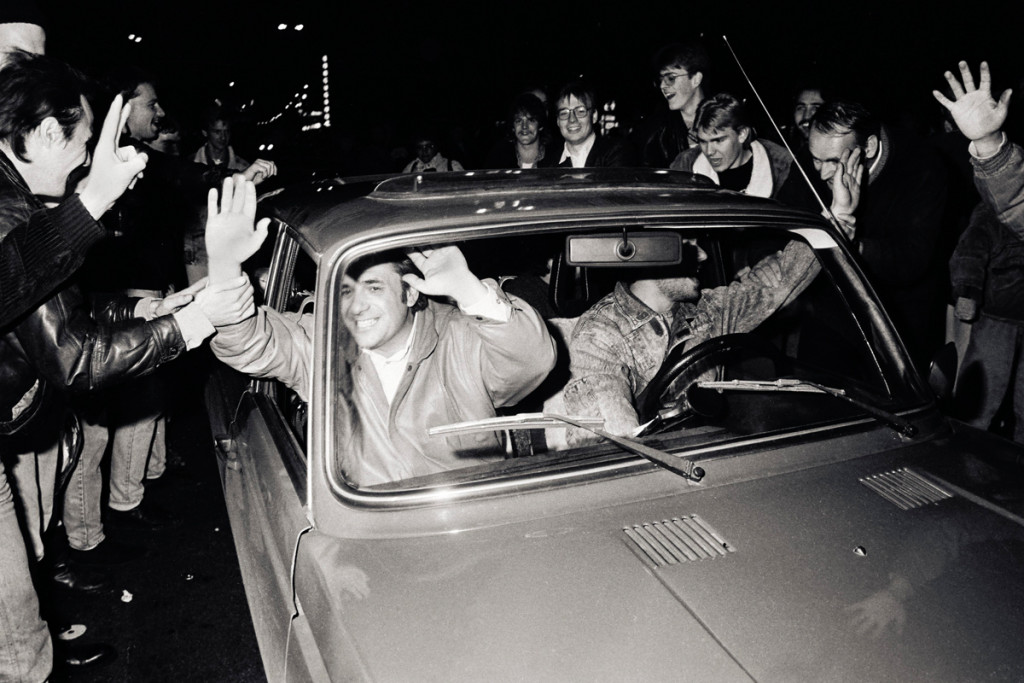 The first East Germans make it by car to West Berlin’s Kurfürstendamm where they are given an exuberant welcome. 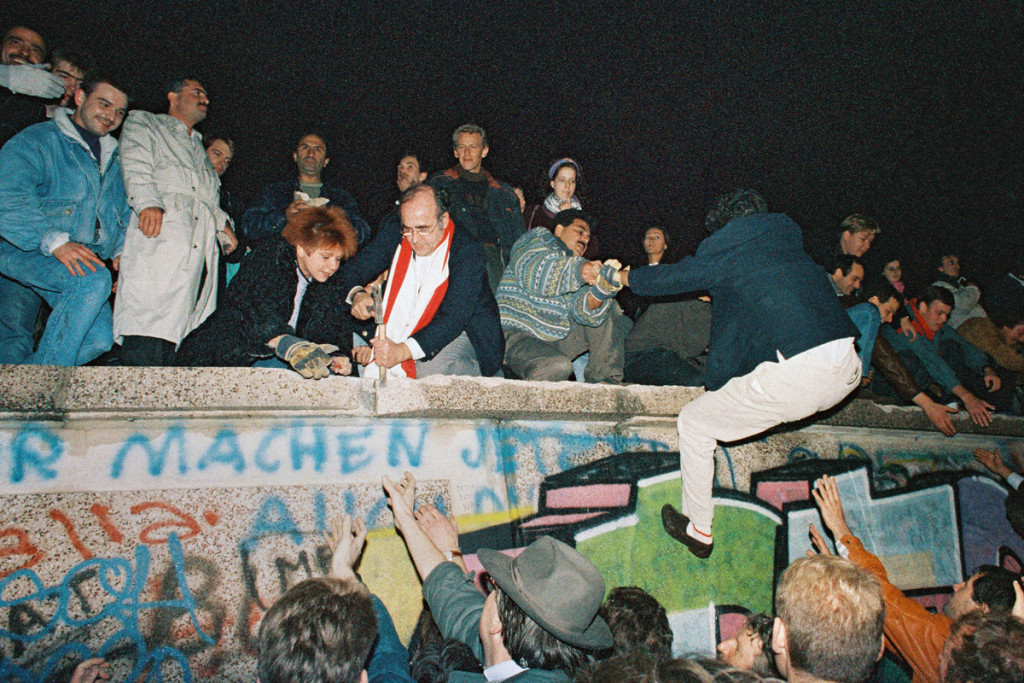 Before the night was out the first "Wall woodpeckers" were out carving souvenirs from the top of the Wall ,... 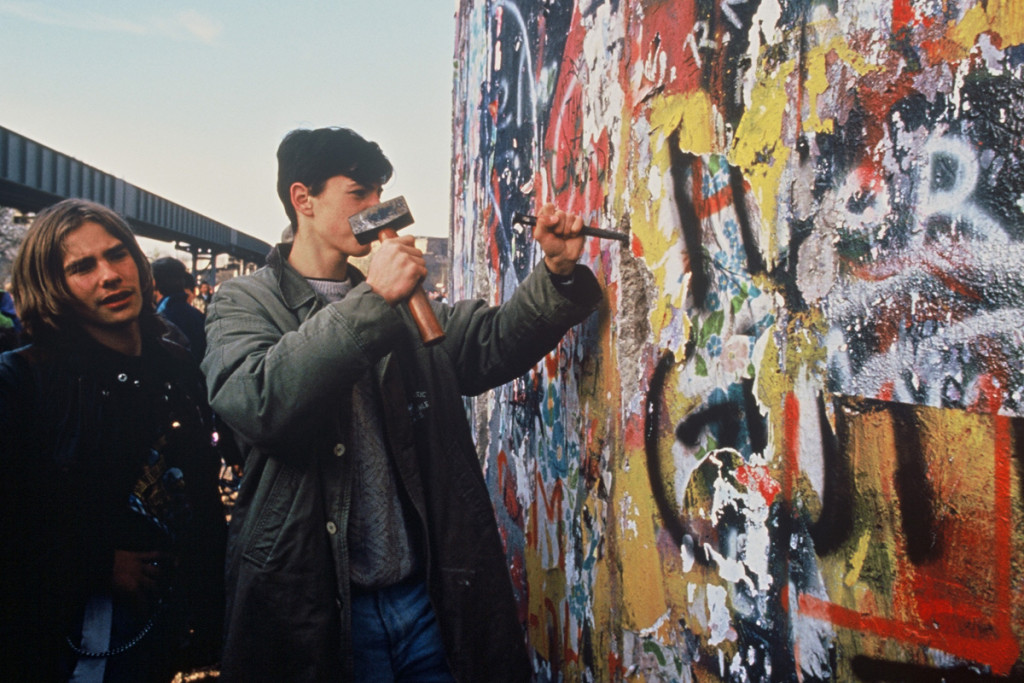 ... and more and more joined them the following day. It was the beginning of the end of the Wall. 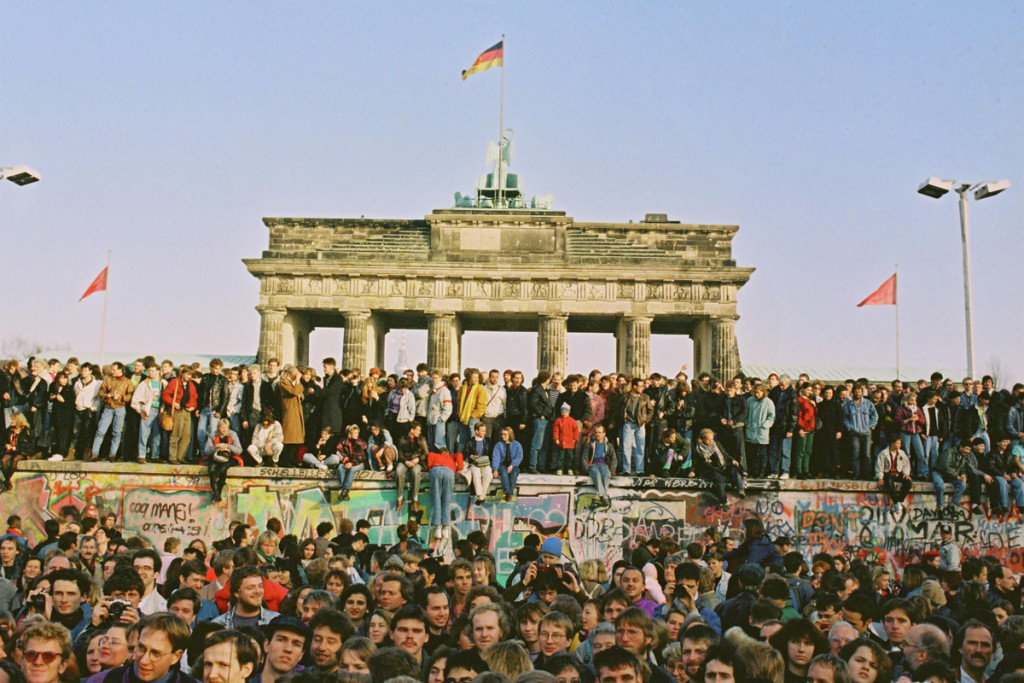 On the morning of 10 November 1989 thousands of people gathered beside and on top of the Wall by the Brandenburg Gate. 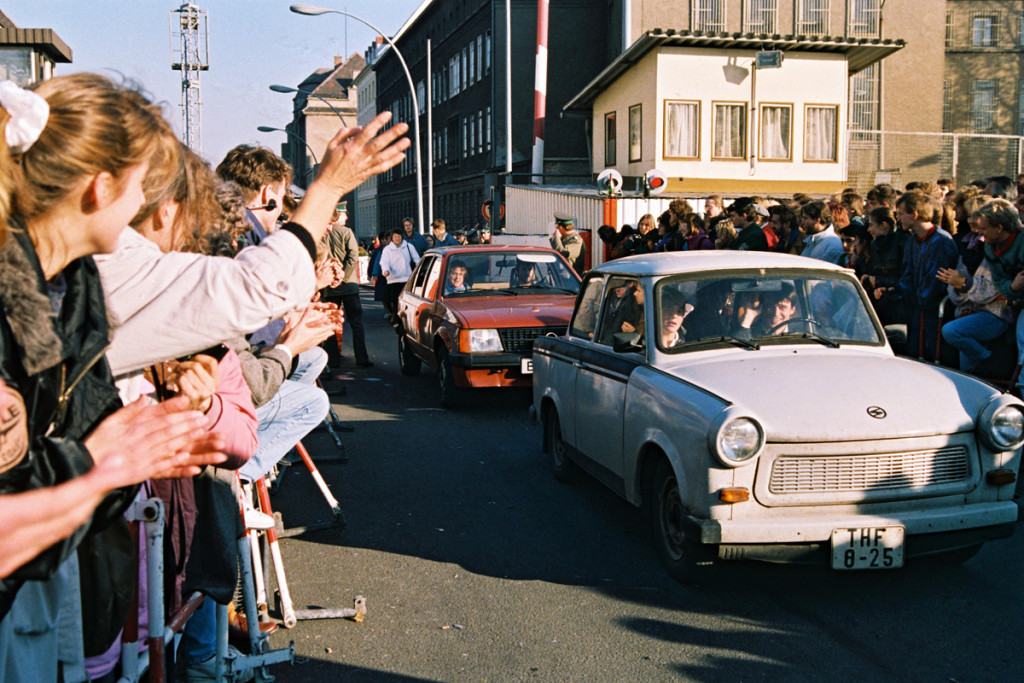 People from West Berlin came to welcome the increasing waves of East Germans at border crossing points like this one in the Invalidenstraße. 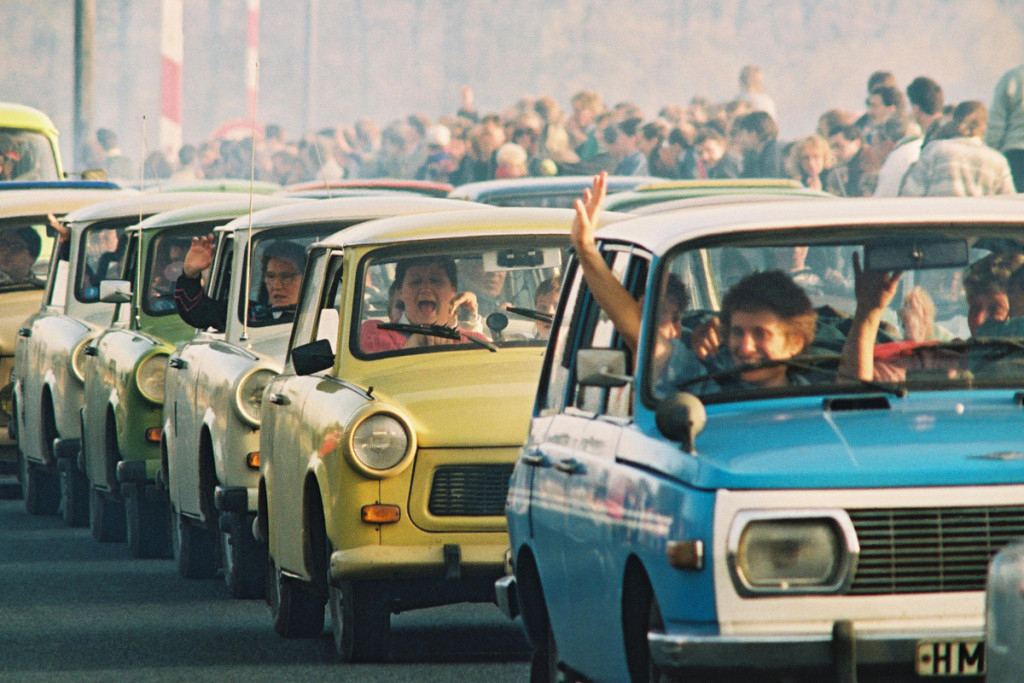 The line of East German Trabants and Wartburgs at the border crossing point Helmstedt/Marienborn seems endless. 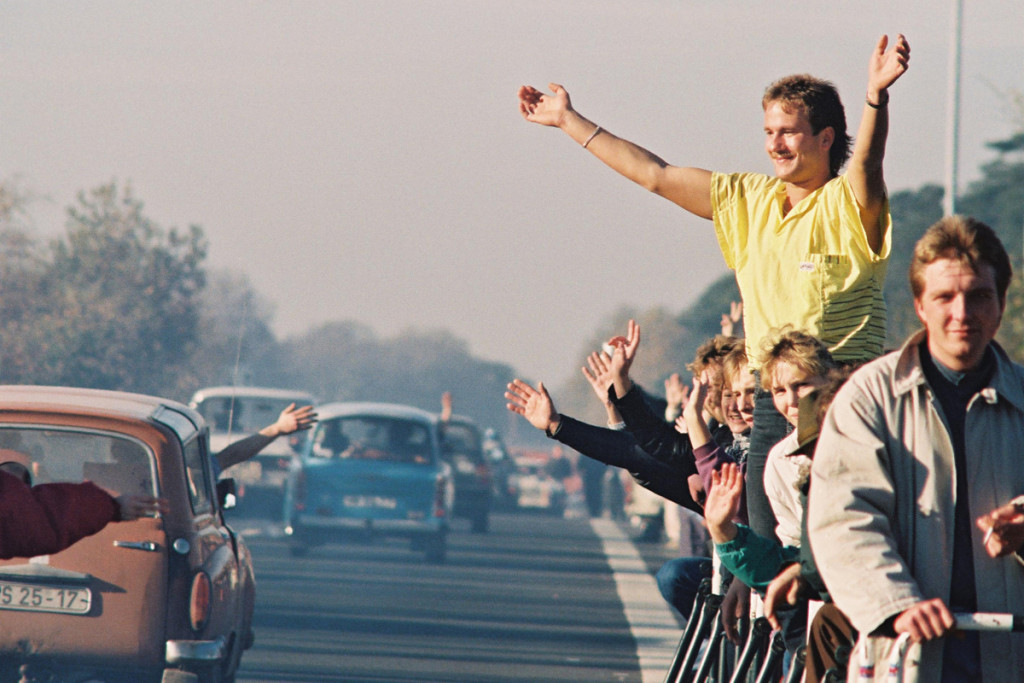 Here too the visitors from the East are given a rousing welcome in the West. 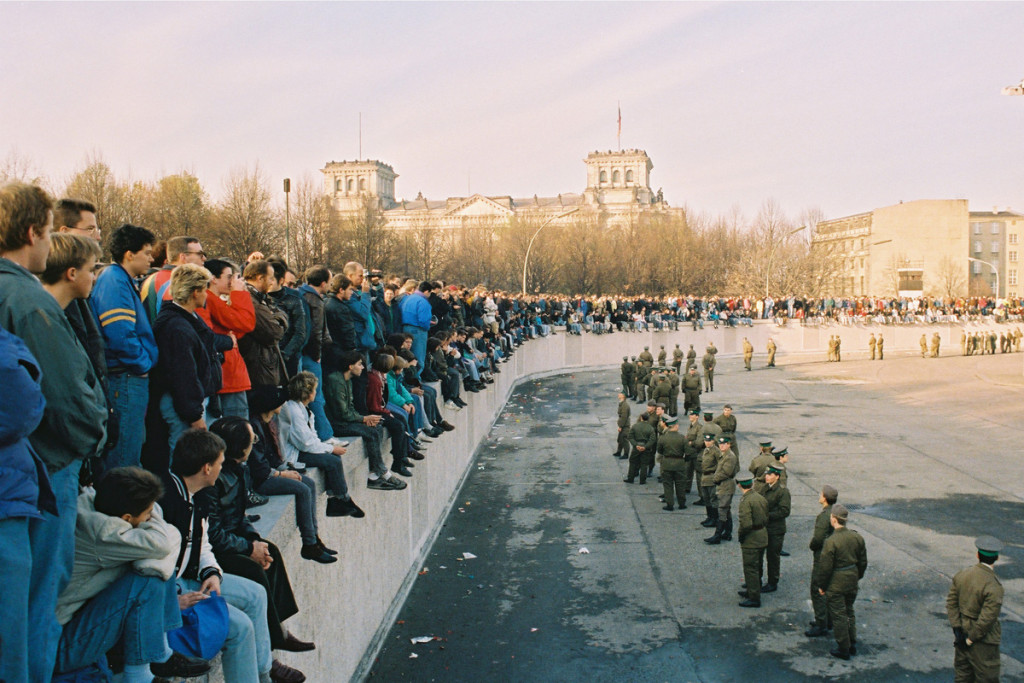 In Berlin the East German police officers are helpless to do anything about the people now crowding onto the top of the Wall. 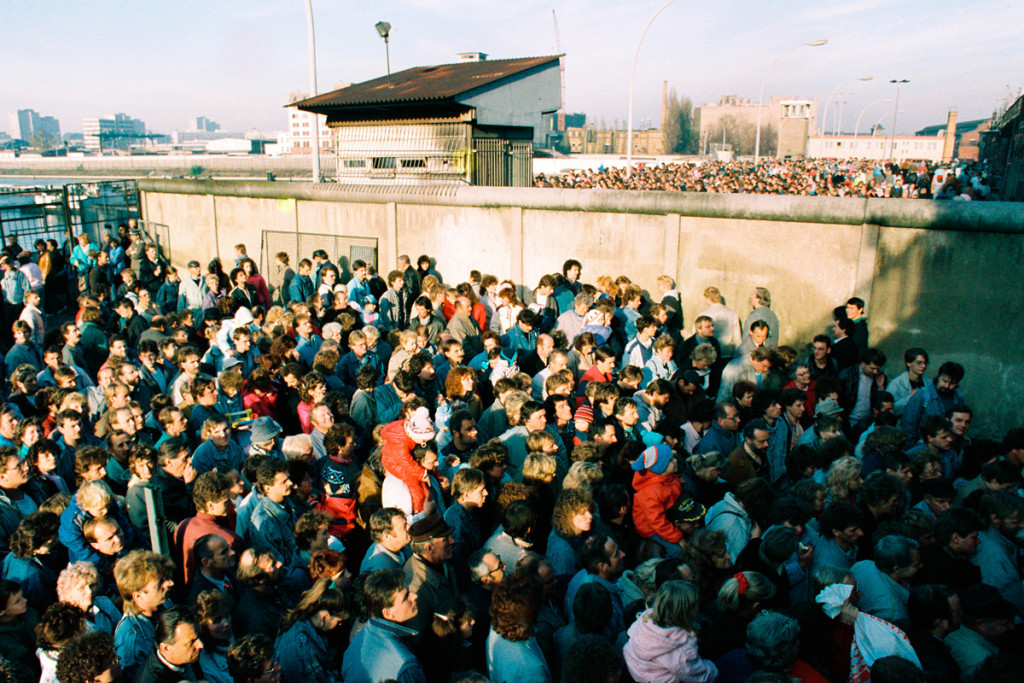 The Oberbaumbrücke border crossing point is hopelessly overcrowded. There is a huge tailback of people waiting to cross to West Berlin. 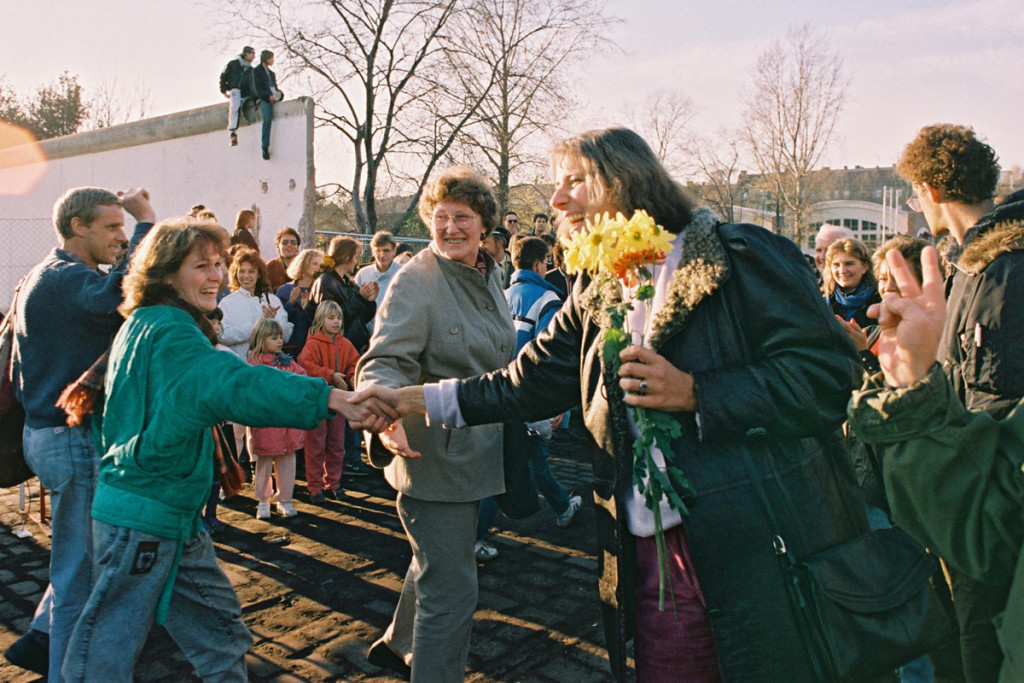 At the Schlesische Allee/Puschkinallee crossing point the East German visitors are welcomed with flowers. 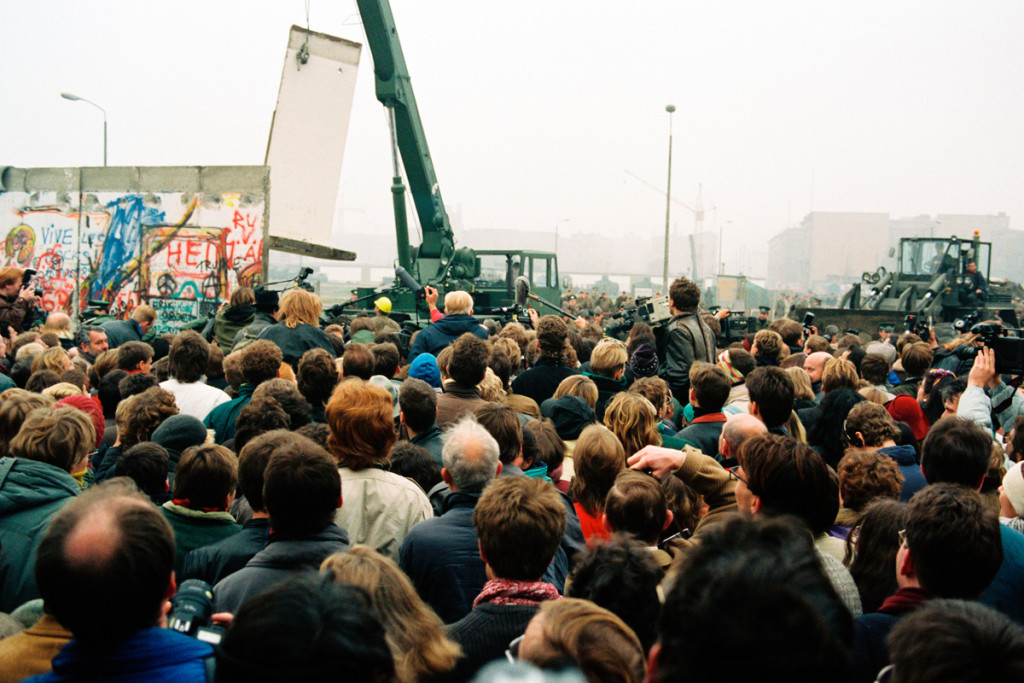 The crowds wanting to cross to West Berlin are so enormous that on 12 November the first sections of the Wall were removed at the Potsdamer Platz to open up a new border crossing point. 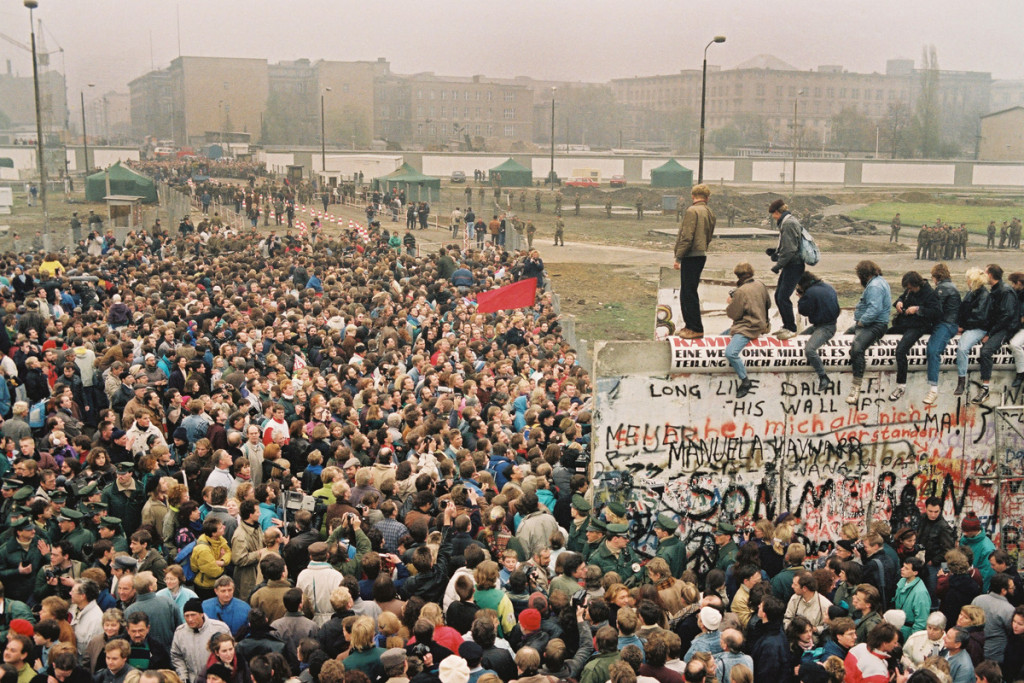 People pour into West Berlin through the huge gaps in the Wall at the Potsdamer Platz. 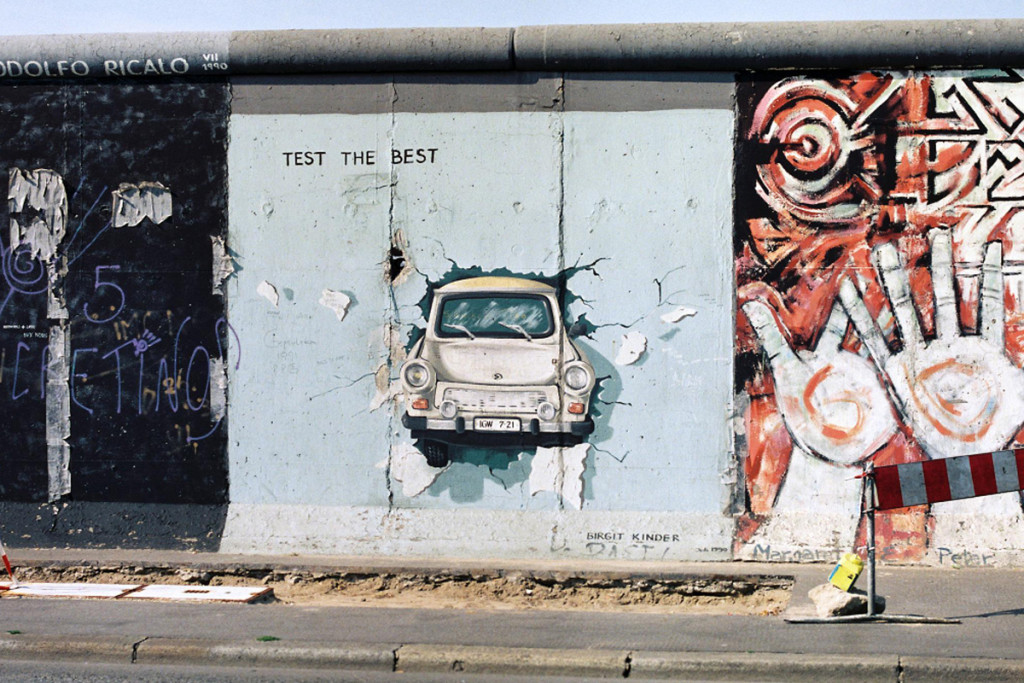 Today the Berlin Wall has all but vanished. But the East Side Gallery, where artists have painted sections of the Wall ... 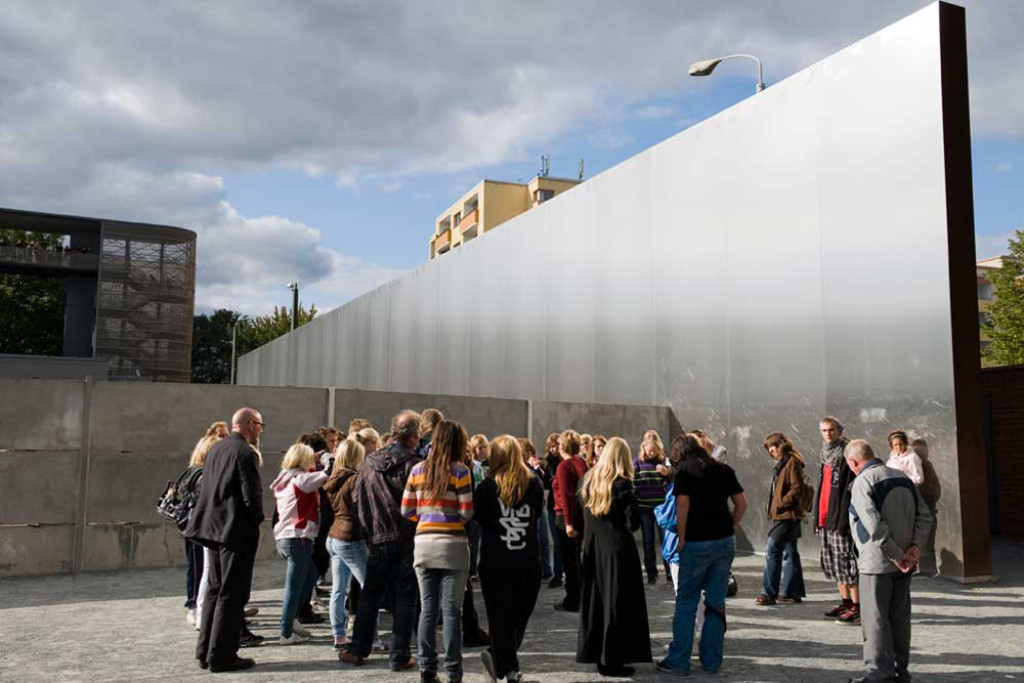 ... and the memorial site "Berlin Wall" at the Bernauer Straße keep alive memories of the dark days when Germany was divided.

And the sheer mass of people brought down the Wall. Very few people had expected that the much-hated, degrading construction would so quickly be relegated to the history books. The leaders of East Germany could only watch helplessly.

The Wall was open – 28 years, 2 months and 28 days after it was built. With the fall of the Berlin Wall the entire border between the two German states opened again. The road was free for German reunification.

Germany is growing together

Twenty-four years on, the living conditions in East and West have become much more comparable. Last year gross domestic product per capita in the states of former East Germany and Berlin rose by 0.5 per cent over the 2011 figures. The numbers of those in employment and paying social insurance contributions continued to rise in 2012. Since 2006 this figure has risen by a total of some 450,000. It is encouraging to note that this trend can be seen in practically all states and almost every branch. The migration flows from East to West have more or less dried up.

For the second time since reunification, Germany recorded a general structural government surplus in 2012. The states in the East helped achieve this result with their budget surpluses. Yet there is still a tangible disparity between East and West in terms of economic strength. Unemployment remains higher and wages lower in the former German Democratic Republic.

Funds from the Solidarity Pact II will support the new federal states in the East until 2019, helping them to bring living standards into line with those in the West. Many other promotion programmes of the German government also support the development of structurally weak regions, in both West and East.