The door is still open for Ukraine

The Chancellor is to keep the door open for Ukraine, should it choose to move closer to the European Union. "We have extended an invitation to Ukraine in conjunction with the Eastern Partnership. The invitation stands." At the EU Eastern Partnership Summit in Vilnius a meeting is planned with the Ukrainian President. 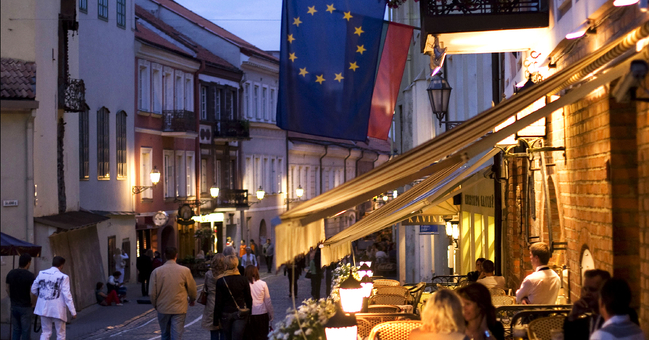 The German government and the European Union are also willing to sign the Association Agreement with Ukraine at a later date should it not be possible at the summit on 28/29 November. The precondition remains, that the Ukrainian government must demonstrate the necessary political will and that tangible progress be made on meeting the conditions laid down by the Council of Foreign Ministers in December 2012.

The programme will officially begin in the evening of 28 November, with a reception held by the Lithuanian President Dalia Grybauskaitė and a working dinner. For 29 November 2013 a plenary session is planned in the morning followed by a press conference given by the Presidency.

Even after the Ukraine’s decision to suspend preparations for the agreement with the European Union, the aim is still to bring Armenia, Azerbaijan, Belarus, Georgia, Moldova and Ukraine closer to the European Union. "The EU will not retract its offer of an Association Agreement," affirmed Chancellor Angela Merkel in Berlin.

Negotiations with Armenia, Azerbaijan and Belarus

The Association Agreements with Georgia and Moldova are ready to be initialled in Vilnius. Negotiations on the Association and a Deep and Comprehensive Free Trade Area with Armenia have been completed. Following Armenia’s announcement that it was intending to join the Customs Union of Russia, Belarus and Kazakhstan, the EU and Armenia are currently considering the future basis for the partnership. Negotiations with Azerbaijan are ongoing, but progress has been made. Azerbaijan is not a member of the World Trade Organization (WTO), which means that there is currently no basis on which to negotiate a free trade agreement.

The current political situation within Belarus precludes any negotiations that would lead to closer bilateral relations. The European Union has linked the assumption of any negotiations to an end to repression and the release of political prisoners. Within the scope of a two-pronged approach the European Union is making every effort to establish a critical dialogue and is supporting the civil society of Belarus.

The German government continues to push for the swift release from prison of the former Ukrainian President Yulia Tymoshenko. President Viktor Yanukovych still has the power to pardon a person at short notice.

Germany’s offer to treat Yulia Tymoshenko back complaint in the Berlin hospital Charité is still on the table.

The Eastern Partnership is a project of the European Union within the framework of European Neighbourhood Policy. The first summit was held on 7 May 2009 in Prague. The aim is to bring Armenia, Azerbaijan, Belarus, Georgia, Moldova and Ukraine closer to the European Union. The heads of state and government of the Eastern Partnership meet every two years. The summit meet is designed to ensure the political steering of the process. The inaugural summit in Prague in 2009 was followed up by a meeting in Warsaw on 29 and 30 September 2011, which focused on stepping up cooperation in the fields of business and commerce.