The discovery in a Munich flat of huge numbers of works of art raises questions as to their provenance. An expert task force has already begun work on establishing just that. This week should see the publishing of more of the works where there is a suspicion that they might have been seized by the National Socialists within the scope of persecution. 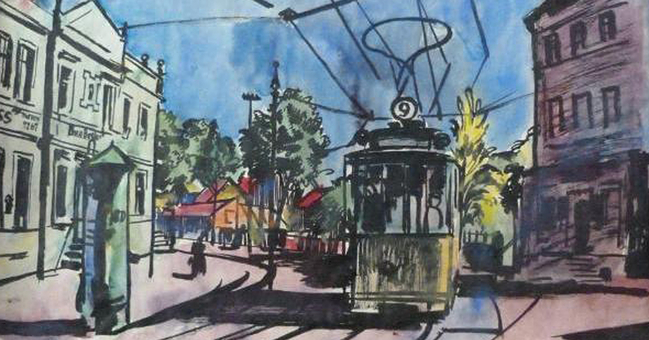 Posted at lostart.de: a watercolour by Bernhard Kretschmar, one of the works discovered in Munich Photo: picture alliance/dpa/Staatsanwaltschaft Augsburg

To establish the provenance of the works as swiftly and transparently as possible, research is to be stepped up on a broad basis. The focus will initially be on the works which might have been confiscated by the National Socialists.

The task force of experts in provenance research was appointed by the German government and the Free State of Bavaria. It will be up to them to determine which of the works can be termed looted art. The question is particularly pertinent for some 590 works, which are to be examined as swiftly as possible.

As of this week all works for which there is a reasonable suspicion that they might have been seized by the National Socialists within the scope of persecution are to be posted at www.lostart.de. The list will then be gradually updated.

The ruling of the Augsburg Public Prosecutor’s Office has been expressly welcomed by all ministries involved at national and Bavarian levels. It is also an expression of Germany’s acceptance of its responsibility for dealing with crimes committed during the National Socialist era.

The work of the taskforce will be coordinated by the Bureau for Provenance Investigation and Research (AfP). It is to be headed by Ingeborg Berggreen-Merkel, , the former Vice-Chair of the AfP Advisory Committee and former Head of Office of the Federal Government Commissioner for Culture and the Media.

Some 590 works posted at lostart.de

In the case of some 590 works there is currently no conclusive proof that they were not taken from their lawful owners under National Socialist persecution.

The Augsburg Public Prosecutor’s Office has now ruled that as of this week all 590 or so works are to be posted step by step at www.lostart.de, as soon as this is technically possible. Information on the first 25 of the works found in the Munich flat was published on this website on 11 November.

This internet database is operated by the Magdeburg-based Coordination Office, which is run by the federal and state governments as the central German service facility for documenting cultural artefacts and recording lost art. The Coordination Office is the contact for enquiries relating to lost cultural artefacts, especially those lost as a result of persecution, and is available in this capacity to answer enquiries relating to documented objects, as requested by the Augsburg Public Prosecutor’s Office.

Between 1933 and 1945 numerous individuals persecuted by the National Socialist regime lost art works and cultural artefacts. Works of art were sold under duress or under desperate circumstances, left behind when their lawful owners fled, seized, confiscated or looted.

In December 1999 the federal government, state governments and central local authority associations signed a joint declaration, undertaking to identify cultural artefacts taken from their lawful owners, particularly Jewish owners, as a result of persecution by the National Socialists, that are in the possession of public institutions, and to find a just and fair solution to restore these to their lawful owners or their heirs.

One year earlier, at the Washington Conference 43 states including Germany agreed basic principles for the return of Holocaust-era assets.