European Prize for the Chancellor

The European Society Coudenhove-Kalergi has awarded Chancellor Angela Merkel the European Prize 2010. The prize is awarded every two years for exceptional contributions to the European unification process. 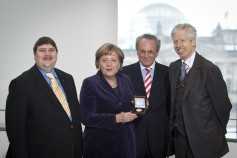 Accepting the award at the Federal Chancellery, Angela Merkel stressed the fact that it was an incentive to her to pursue her work for Europe. She pointed to the greater European integration that the common currency has brought. “We will of course fight to ensure that this currency is strong, that it can hold its own on international markets, and that it goes hand in hand with a high level of competitiveness in the European Union and with social cohesion and a clear foundation of shared values.”

The European Society pointed to the strong commitment of the Chancellor and her interventions to reconcile divergent viewpoints in the drafting of the new European treaties of the European Union.

They singled out in particular Angela Merkel’s crucially important contributions to ensuring stability and underpinning the future of the European project.

Angela Merkel is the second German head of government (after Helmut Kohl who received the prize in 1990) to be awarded this prize. The last time the European Prize was awarded in 2008, it went to the former Polish Foreign Minister and current Secretary of State in the Polish Government, Władysław Bartoszewski.

The European Prize is based on the vision of the diplomat, philosopher and publisher Richard Coudenhove-Kalergi. His family had its roots in several European countries. In 1922 Richard Coudenhove-Kalergi founded the Paneuropean Union, the oldest European unification movement, which attracted illustrious members including Albert Einstein and Konrad Adenauer. For this, he is deemed the founder of the modern democratic vision of Europe.

The Coudenhove-Kalergi Foundation was established in 1978 by the Paneuropean Union to strengthen the vision of European unification. In 2008 it became a society, with headquarters in Vienna.