The Chancellor has met with Chinese Prime Minister Li Keqiang for talks during his inaugural visit. Problems ought to be resolved within the framework of a dialogue, stated Merkel. This also applies to the current trade dispute between China and the European Union. 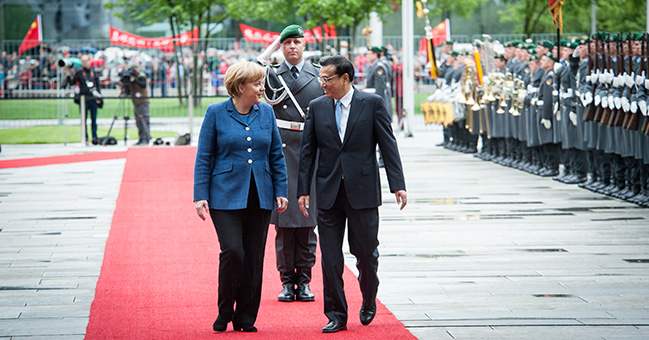 A shared goal - stepping up cooperation between Germany and China Photo: Bundesregierung/Bergmann

The intensive discussion of the two heads of government focussed on bilateral political and economic relations, the situation in the euro zone, climate change and foreign policy issues.

They also touched on social developments in China. Their talks will be continued on Sunday evening in Meseberg over dinner with representatives of the business community and on Monday at the Federal Chancellery.

The number and scope of contracts and agreements signed at the meeting at the Federal Chancellery illustrate the diversity and dynamic nature of economic cooperation between the two countries. From the automobile industry to the chemical and textile sectors – cooperation is to be further stepped up and expanded.

In spite of the global economic crisis, relations between China and Germany are developing dynamically. In  2012 total trade between the two states was worth almost 144 billion euros. Bilateral trade with Germany accounts for about 30 per cent of China’s trade with the European Union as a whole. This positive trend is to be continued: the two countries aim to boost the volume of trade to 200 billion euros by 2015.

Press statement issued by the Chancellor and the Chinese Prime Minister:

After their talks the Chancellor listed four fields in which cooperation is to be further stepped up:

The two heads of government agreed that protectionism cannot be the answer to the challenges of globalisation.

The Chancellor had a clear stance on the current dispute between the European Union and China over Chinese solar-power modules. Germany, she said, "will do all it can to resolve trade conflicts through as many talks as possible". Disputes that lead only to both sides hiking customs duties cannot be in anybody’s interests, she added. Angela Merkel will be doing her utmost to ensure that intensive talks with the Chinese side are held at European level, in order to address the relevant issues.

With its accession to the World Trade Organization, China has committed to opening its markets, and some commitments have already been realised – the country must now continue down this path. In a joint press declaration the two sides stressed that they will be endeavouring to ensure "strict compliance with the rules of the World Trade Organization" as well as a "fair, equitable, multilateral trading system."

Consultations on fiscal and financial issues

The Chancellor pointed to the numerous ongoing government dialogues between the two countries – there are a total of over 60 different dialogue forums. The human rights dialogue took place only recently in China. The rule-of-law dialogue too is an important part of intensive bilateral relations. Both of these dialogues are to be continued.

The fiscal and financial affairs dialogue is particularly important and topical. The governments stressed the fact that the dialogue between their finance ministries is to be stepped up; the central banks too are to continue their intensive dialogue.

The Federal Republic of Germany and the People’s Republic of China have maintained diplomatic relations since 1972. Relations are good and cordial and have developed over the last 40 years to cover a wide spectrum of issues, a remarkable depth and increasing political substance. Since 2004, bilateral relations have been termed a "strategic partnership with global responsibility". In July 2010, Chancellor Angela Merkel and the then Prime Minister Wen Jiabao put relations on a new footing by establishing regular government consultations (the first round was held in June 2011 in Berlin, the second round in August 2012 in Beijing).

After talks with Li Keqiang, Angela Merkel praised China’s role in mastering the euro-zone crisis. China has always seen the euro as an important currency, and taken supportive action, she reported.

The European Union for its part has made "much progress" on resolving the crisis, and has always made a clear commitment to the euro. Now more reforms are needed to create job and generate growth.

Overcoming differences of opinion through talks

The Chancellor also spoke to her guest about intellectual property rights. The German government assumes that China will enforce the pertinent legislation and take effective action against any infringement of intellectual property rights. Innovative Chinese companies too have an intrinsic interest in effective investigation of violations of these rights.

Equally, the Chancellor mentioned the freedom of journalists and the media to perform their work and cultural freedom. China and Germany can cope with their differences of opinion, declared Angela Merkel with conviction. "We must attempt to overcome these differences of opinion through talks,", she continued.

Together Angela Merkel and Li Keqiang opened the German-Chinese Language Year. Before their first private meeting they met German and Chinese school children and students at the Federal Chancellery. With the Language Year the two governments are spotlighting cultural and education policy, as agreed at the government consultations in August 2012.

The initiative aims to encourage a larger number of people in China to learn German. The school twinning initiative is to be expanded to embrace 146 schools by the end of 2013. Currently 81 schools are involved. In-service training for German teachers is also to be improved.

In Germany, Chinese language instruction and language-related cultural exchange between the two countries is to be promoted to a greater extent. "It is only when people understand one another and can speak to one another directly that they get to know one another and share their experiences," explained the Chancellor.

Angela Merkel and Li Keqiang also discussed the further expansion of cooperation at university level, with a special focus on technology, engineering and the applied sciences for the environment and climate change mitigation. An endowed Chair for Modern Chinese Studies at Berlin’s Humboldt University is to further step up cooperation in the research field.

At their meeting, the two heads of government also discussed the situation in international crisis regions. As well as Iran’s nuclear programme the focus was on the situation in Syria. China is also working for a political solution, said Angela Merkel’s guest.

With their exchange of views on international issues Angela Merkel and Li Keqiang fleshed out the strategic dialogue between the European Union and China, which is celebrating its tenth anniversary this year.

Li Keqiang invited Angela Merkel to visit China again – an invitation that that Chancellor was happy to accept.

The next government consultations will be held in 2014 in Germany. The two governments agree that there are enough issues that should be discussed. Germany and China aim to provide mutual support and to contribute to building peace and prosperity in the world.